20 Cities Where Aerospace Workers Are In High Demand 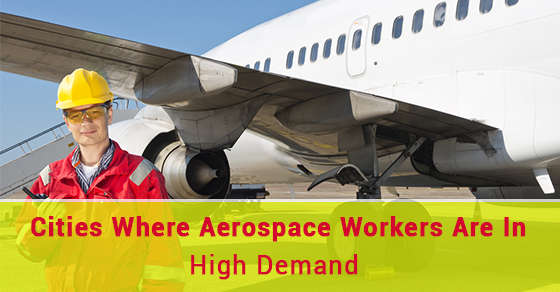 Aerospace is a field that focuses on the development of space and aircraft materials. This industry has two main concentrations, aeronautical engineering and astronautical engineering. Those who work as aeronautic engineers deal with the design, building and science of aircraft technology. Those who work as astronautic engineers are responsible for the broad application of science and engineering to aerospace activities such as astrodynamics, aerospace systems design and control systems.

If you are considering pursuing a career in aerospace or have recently completed your schooling, there are 20 cities in North America where your qualifications will go over very well.

Ontario is the leading province where aerospace workers are in high demand with Canada’s capital city, Ottawa, employing many professionals in this field. Besides Ottawa, Toronto is also a hub for the industry. Toronto boasts the third highest technology sector in North America with Montreal, Quebec following close behind. Vancouver is vastly becoming an aerospace centre with the need for sustainable aeronautical tech becoming a priority.

With California and Texas seeing strong numbers in the aerospace industry, it’s no wonder Canadian recruiters are sending their applicants to the States. Besides Los Angeles, Anaheim, San Diego, Forth Worth, Arlington, Houston and Dallas-based companies hiring a large chunk of the industry’s employees, the east coast is also thriving. Aerospace engineers are in high demand in cities like Hartford, Connecticut; Philadelphia, Pennsylvania; Boston and Cambridge, Massachusetts; and Washington, D.C.

What qualifications do employers look for in the field of aerospace?

No matter what city you have extended your job search to, there are certain qualifications that all aerospace employers look for.

To recap, the 18 North American cities where aerospace workers are in high demand are:

Regardless of where you choose to pursue a career in the aerospace industry, you’ll be sure to embark on an exciting, challenging and fulfilling career.