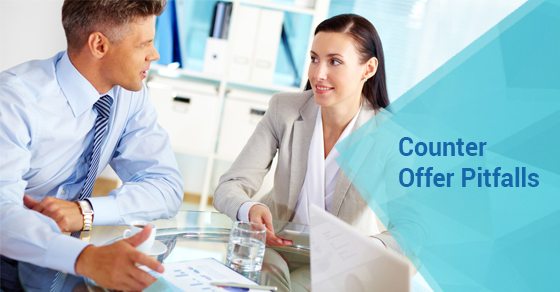 When one of your best employees walks into your office and gives you a resignation notice, perhaps to pursue an opportunity with another firm or start their own company, you may be tempted to make a counter offer persuading that person to stay. Just like no one likes to be fired, the employer feels like an employee cannot just quit working for them.

There’re a few other reasons why the employer would try to make things right, including:

When someone quits, it is commonly perceived as a reflection on their boss. And unless the employee is incompetent or too inexperienced, the boss will look likely look bad by allowing a trained and experienced person to leave. Naturally, the employer’s reaction is to do whatever it takes to keep the employee from leaving, or at least until there’s a suitable replacement.

However, the counter offer is not always what people believe it to be.

Unless the employee is known for making rushed decisions without considering the implications until later (or even not at all), he/she has probably weighed the pros and cons of making a change from your organisation before approaching their higher ups. Alternatively, if that employer is known for making hasty decisions, it could be a healthy change to see them leave your team.

Before jumping into a counter offer, consider these three crucial elements:

Keep in mind that once someone is unhappy or shows interest in moving to a different organization, your relationship has already changed and persuading them to stay might produce mixed or short-term results, at best. Instead of trying to hold onto an employee who has shown interest in moving on, put your company efforts towards finding a new candidate who will be successful in the role, and who will maintain longevity with your company.

Contact the team at The Executive Wing today for more information.